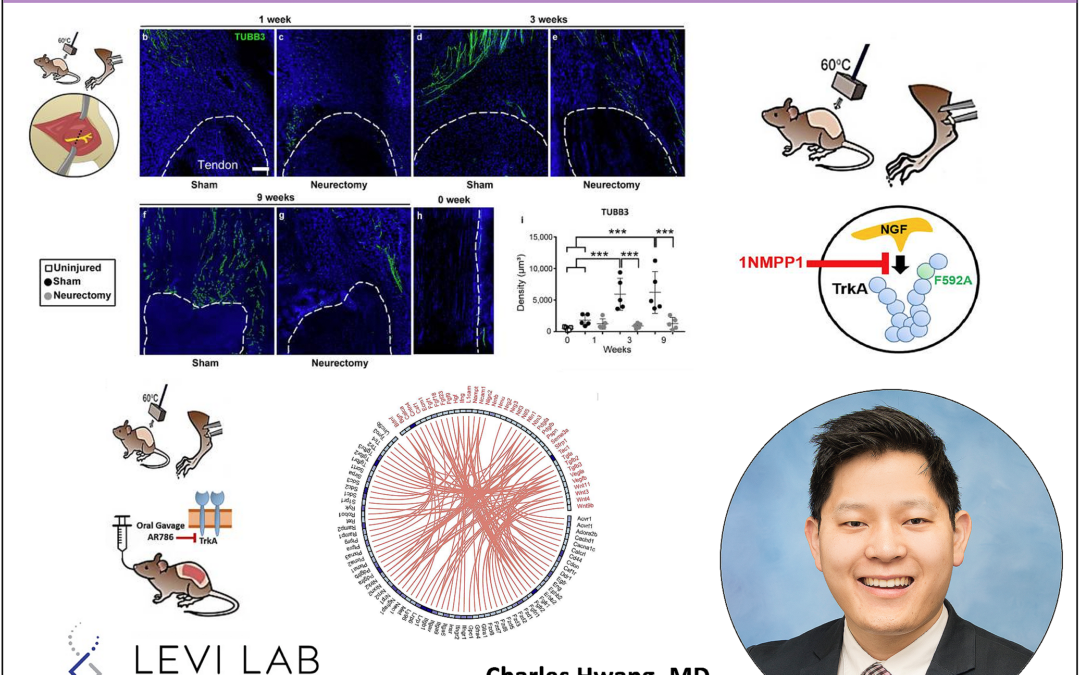 Observations from developmental biology have previously clued in researchers into the possible link between nerves and bone formation. While the role for neurotrophic factors like Nerve Growth Factor (NGF) have been demonstrated to recapitulate patterns seen in developmental biology in the context of fracture and healing, the Levi Laboratory has demonstrated the importance of NGF in the regulation of post-traumatic heterotopic ossification, a manifestation of dysregulated inflammation and *aberrant* wound healing. New research recently published in the journal Nature Communications, describes a novel description of cellular programs that critically regulate and points to a possible new target for the mitigation of post-traumatic ectopic bone formation. The research team led by Dr. Benjamin Levi and Dr. Charles Hwang of the Department of Surgery’s section of plastic surgery, observed the effect of halting nerve transmission on HO. Using tissue from injury sites in mice that typically form HO, they demonstrated smooth muscle cells as being potent sources for NGF transcripts and also translated protein. Indeed, across multiple means of interfering with NGF activity by drugs or genetically prohibiting its production, post-traumatic heterotopic ossification was successfully attenuated. Denervation also precipitated changes within cell transcription, polarizing the typical TGFβ program to a FGF pattern, mitigating the terminal differentiation of these progenitor cells into cartilage and bone. Given the correlation with HO and pain, these investigators hope to translate these findings to patient therapies, inhibiting bone but also simultaneously mitigating the propagation of pain in patients with musculoskeletal polytrauma. This work exemplifies the invaluable cross-institutional collaboration with bony experts, Aaron W. James, Seungyong Lee, and Thomas Clemens, from Johns Hopkins University, along with the talented research teams throughout the laboratory. Special thank yous to the University of Michigan Department of Surgery and Section of Plastic Surgery, Center for Molecular Imaging, and the rest of the Levi laboratory team.